The Crater Planning District Commission (CPDC) is a regional planning agency with major emphasis in the areas of transportation, economic and small business development, the environment, and serving as the convener for major military-related discussions among the region’s communities. As a certified economic development district by the U.S. Economic Development Administration, the Commission oversees development of the District’s five-year Comprehensive Economic Development Strategy (CEDS) which is updated annually.

To strengthen the quality of life throughout the Crater planning District region by serving as a regional forum of member local governments to address issues of regional significance, providing technical assistance to localities, and promoting and enhancing the collective consensus on the economic, transportation, social, environmental, and demographic interests of the region.

The CPDC’s major objectives are to:

The Crater Planning District straddles the Fall Line, the geological divide that restrains the inland flow of ocean tide, with the western portions of Dinwiddie and Greensville counties in the Piedmont Plateau and the remaining area in the Coastal Plain. Elevations range from 400 feet in the west to less than 100 feet above sea level in the east. Some of the low-lying areas are swampy.

The area’s rivers have played a role in its development; Petersburg, a river port throughout the nineteenth century, was settled at the point where the Appomattox River crosses the Fall Line, and Hopewell, just downstream, is at the confluence of the Appomattox and the James. Surry, across the James River from Jamestown, was settled concurrently with Jamestown.

Interstate 95 is the principle highway in the Crater Planning District. It bisects the planning district, connecting it with Richmond to the north and with North Carolina to the south. I-295, which begins north of Richmond and goes through Hopewell to Petersburg, provides an alternative to I-95. In addition, Interstate 85 originates in Petersburg and slants southwest through Dinwiddie County into North Carolina. U.S. 460 connects the Petersburg area with Norfolk and the ports of Hampton Roads and U.S. 58 passes through Emporia along the state’s southern border, also a connection to Hampton Roads.

Petersburg is a rail center where several lines converge from the southeast, south and southwest before proceeding north to Richmond. Four general aviation airports serve the Crater Planning District Commission; the Chesterfield County Airport, the Greensville-Emporia Airport, the Dinwiddie County Airport and the Wakefield Airport. The Richmond International Airport is located a short distance to the north of the planning district.

In 1968, Virginia was divided into planning districts based on the communities of interest among its counties, cities and towns. A Planning District Commission is a political subdivision of the Commonwealth chartered under the Regional Cooperation Act by the local governments of each planning district. As such they are a creation of local government encouraged by the state.

There are 21 Planning District Commissions (PDCs) in Virginia. The Crater Planning District Commission (CPDC) was formed by local governments in May 1970 under the authority of the Virginia Area Development Act – revised and retitled the Regional Cooperation Act in 1995. It is comprised of twenty-eight individuals, a majority of whom are local elected officials appointed to the PDC by member local governments. The Commission selects an executive director responsible for managing daily operations. Commission offices are located generally in Petersburg Virginia, a central location for the region as determined by the Commission Charter. Meeting schedules vary, and meetings are open to the public.

CPDC is a member of the Virginia Association of Planning District Commissions which helps its member PDCs meet their responsibilities to local and state government and coordinates inter-PDC functions.

THE PURPOSE OF PLANNING DISTRICT COMMISSIONS, AS SET OUT IN THE CODE OF VIRGINIA, SECTION 15.2-4207, IS

“…to encourage and facilitate local government cooperation and state-local cooperation in addressing on a regional basis problems of greater than local significance. The cooperation resulting from this chapter is intended to facilitate the recognition and analysis of regional opportunities and take account of regional influences in planning and implementing public policies and services.​The planning district commission shall also promote the orderly and efficient development of the physical, social and economic elements of the district by planning, and encouraging and assisting localities to plan, for the future.” 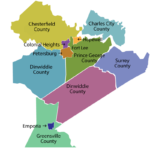 The Crater Planning District Commission covers an area of 2,500 square miles with a population of approximately 526,000 located within the 11member jurisdictions.

Explore and learn more about our 11 localities.