About the City of Emporia

Perched on the fall line of the Coastal Plain, the City of Emporia has historically been a commercial hub in Southside Virginia. The area along the Meherrin River was first explored in 1670. The Town of Hicksford was settled in 1710 where the Fort Road of eastern Virginia crossed the Meherrin River in route to Fort Christianna. The Town of Belfield was established in 1798 on the north bank of the river.

Because of friction between the two villages, Benjamin Tillar, a county native of Virginia House of Delegates, named the town after Emporia, Kansas, the hometown of one of his associates in the Atlantic and Danville Railroad. Emporia comes from the Latin word meaning place of plenty where business is transacted. The General Assembly revoked the town charter in 1888, a year after it had incorporated Emporia, and did not reincorporate the town until 1892. Emporia, Virginia located in Greensville County, was founded in 1887 from the merger of Hicksford and Belfield. The two Greensville County towns merged in 1887 to form Emporia, which was chartered as a City in 1967.

The City of Emporia (pop. 5,700) is the southern gateway to Virginia. Just 8 miles from the North Carolina line, it is the first municipality on I-95 heading into Virginia. Emporia is an hour’s drive (65 miles) from the Capital City of Richmond, three hours’ drive (180 miles) from the Nation’s Capital, Washington, D.C., and strategically “mid-way between the Big Apple and Disney world.” 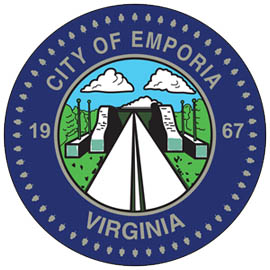