About the City of Hopewell

City Point, the oldest part of Hopewell, was founded in 1613 by Sir Thomas Dale. The location on a bluff overlooking the confluence where the Appomattox River meets the James River has been an important factor in Hopewell’s history for over four centuries.

The tiny colonial village of City Point eventually played a part during the Revolutionary War first with a skirmish fought on its banks. Later, in 1864-1865, General Ulysses S. Grant directed the 10-month Siege of Petersburg from the grounds of Appomattox Plantation. This historic home is now part of the City Point Unit of Petersburg National Battlefield.

The village of City Point became the City of Hopewell (incorporated in 1916) and was developed by the DuPont Company of Wilmington, Delaware in 1914. This company first built a dynamite factory and then switched to the manufacture of guncotton during World War I. Although DuPont left Hopewell after the war, many manufacturing giants have since located in the city. These companies include: Honeywell, Evonik Industries, Smurfit-Stone and Hercules. Products as diverse as the first automatic dishwasher, the first Kraft paper and cardboard boxes, china and artificial silk have been manufactured in Hopewell.

Hopewell has received the Governor’s Clean City Award and is noted for its landscaping and beautification. 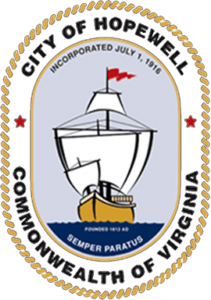 The City of Hopewell is an independent, historic, riverfront city situated at the confluence of the Appomattox and James Rivers, approximately 20 miles south of Richmond and 130 miles south of Washington, DC. Hopewell has a land area of 10 square miles with a population of 22,767 residents.